Since my husband, daughter, and I are flying to Mexico very early tomorrow morning, we weren’t able to celebrate Thanksgiving with my family members who live hours away.

So instead, I decided it would be fun to imagine a Thanksgiving table filled with some of my favorite authors. Here are my self-imposed rules. Feel free to play along and post your guest list in the comments.

1. Guests have to currently be alive. It has to have some sense that this could maybe possibly happen!

3. Guests have to be authors, but they could have written many books or just one.

Ok, next, I wanted to pick queen J.K. Rowling because who doesn’t love Harry Potter?! And it’d be lovely to have someone at the table with a British accent, but really? Getting her to my house seems unrealistic- even for this made up scenario!

(P.S. I’ve been busy packing for our trip all day today, so this post is seriously lacking in images. Please picture a cleverly photoshopped image with all the authors sitting at a dining room table! Thanks!) 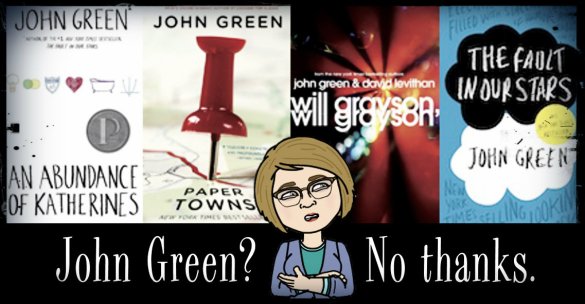 — Warning: may contain teeny, tiny book spoilers about Paper Towns and An Abundance of Katherines —
It’s official. I am not a John Green fan.
If you didn’t gasp or let out a disgruntled hmmpf, then you probably aren’t familiar with Green. John Green is a Young Adult author who has legions of adoring fans. His novels include Looking for Alaska, Paper Towns, An Abundance of Katherines, Will Grayson, Will Grayson (with David Levithan), and a little novel-turned-movie you might have heard of called The Fault in our Stars. Green is kind of nerdy and adorkable. He video blogs along with his brother Hank and has inspired a community of followers who call themselves Nerdfighters. He has won myriad awards for writing about teenagers in (supposedly) realistic settings. His books have sold millions of copies and two have become movies (Paper Towns is scheduled to premiere this summer). He was also included in Time magazine’s list of 100 most influential people in the World. In all, he’s an author getting a lot of buzz.
So how could I, a lover of Young Adult literature, not be a fan of John Green?
I know, I was surprised too! I really wanted to like his books, and gave them an enthusiastic shot, but after reading four of his novels, I can’t quite figure out what the big deal is. I read The Fault in our Stars and thought I liked Green’s work. You can read my comments about the novel here. I wasn’t a crazy, adoring fan who was ready to get the word “okay” tattooed on my body or anything, but I liked the book well enough.
But then I read three of his other books: Paper Towns, An Abundance of Katherines, and Will Grayson, Will Grayson. While reading all three books, I was faced with the decision of whether to keep reading or to abandon the novel. I kept reading mainly because everyone else seemed to love his books so much. At first I thought I didn’t like the books because the plots were so similar (road trip, anyone?!), but that wasn’t really it. I mean, I was a huge fan of Nancy Drew books, and they all followed the same, predictable plot formula. Instead, what really caused me to dislike Green’s novels are his characters. They are unlikeable. I wouldn’t be friends with them in real life. I don’t get a literary crush on any of the characters. They are whiny, philosophical, annoying, and sometimes boring.
In Paper Towns, Quentin, Q, gets obsessed with the disappearance of his neighbor and long-time crush, Margo Roth Spiegelman. Q has these deep thoughts about people and whether we can truly know someone based on what they choose to show us about themselves, and it gets so repetitive and dull that I sometimes found myself skimming through paragraphs of text until I got back to the action. His love interest, Margo, is so completely unlikeable that it’s a disappointment when she returns to the story. She’s just plain selfish. Why this book is becoming a movie is beyond me.
An Abundance of Katherines follows the story of friends Colin and Hassan as they take a road trip to get over Colin’s latest break up. I found it hard to believe that a socially-awkward boy who spends all his time reading and learning languages would have had nineteen girlfriends. He’s obsessive and self-centered, and I can’t see what all of these girls would have been drawn to. Again, the novel’s burgeoning love interest isn’t all that great either. She is a girl who admittedly changes herself so that she is liked by whatever type of person she is around. She does this to the point where she doesn’t even know who she truly is anymore. She was dating her boyfriend mostly to get back at him; she didn’t even really like him. Despite this, we as readers are supposed to like her. On top of the characters, the novel included sections of math formulas that I skimmed over, as well as footnotes that I just found annoying. In all, I think I really could have stopped reading this book and I don’t think I would have felt bad about it.
So there you have it. An unpopular opinion for sure, but it just goes to show you that we all have different tastes in novels and authors. I will be removing Looking for Alaska from my Goodreads To-Read shelf and I will not be reading Green’s future novels.
How about you? Are you a Green fan? Tell me why or why not in the comments.
by love2read365

I recently mailed a package to the school I worked at for four years. Inside the box was a stack of books that I had picked up at the Half Price Bookstore, read, and wanted to share. Mind you, I bought these books months ago, but I couldn’t bear to part with them! I almost decided not to mail them at all. Then I looked around at our apartment (which is bursting at the seams already) and decided that since I had read the books, I could live without the physical proof. Here’s what I sent and a review in fifteen words or less, plus some notes to help you decide whether or not you should add it to your summer reading list:

How did I do?  Do you think my box of books will be a hit with teenagers looking for something new to read? 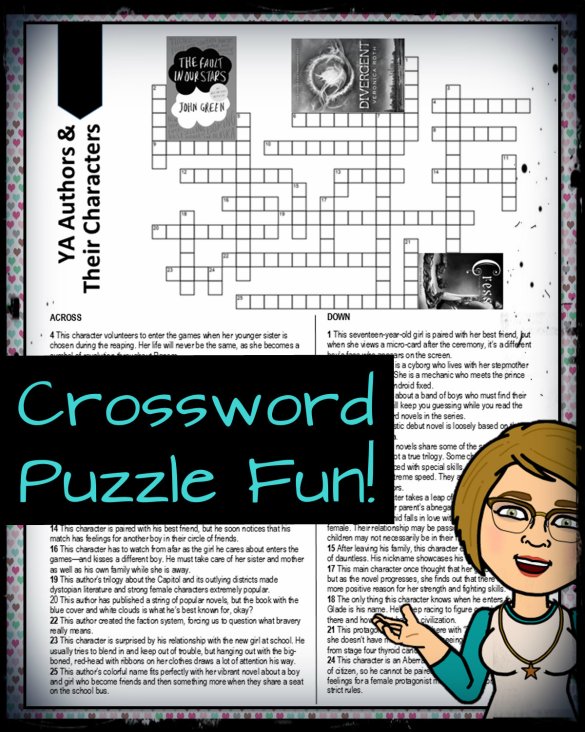 Try your hand at this crossword puzzle I created just for you!  It’s made up of current popular YA authors and their main characters.  Click on the link below to open up the PDF file.  Print out a copy and see how you do.  A solution page is provided too.

Print this puzzle: YA Author Crossword (1)